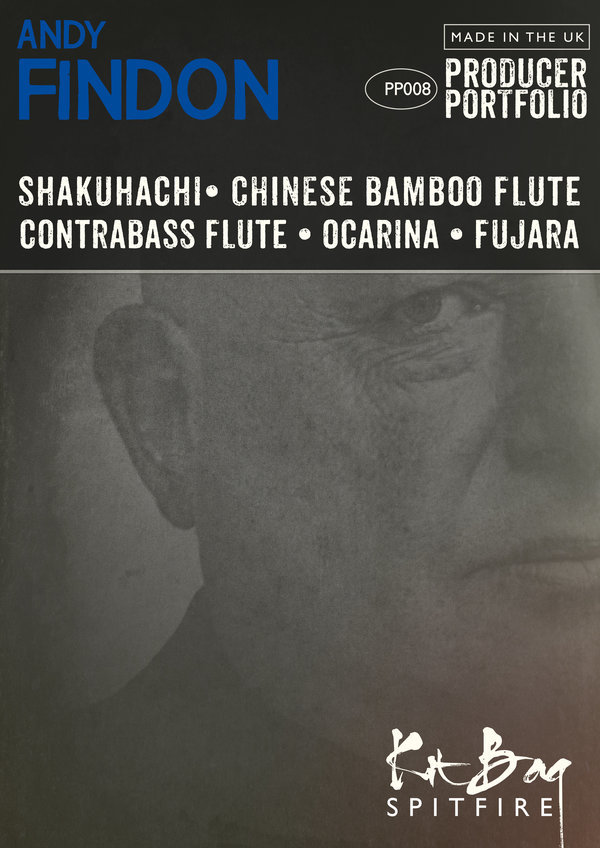 Andy’s Kit Bag is an introduction to the marvelous world of Andy and his amazing collection of ethnic flutes and other woodwinds.

5 new deep sampled esoteric instruments IN ONE PACK. Recorded “The Spitfire Way” in our new facility in King’s Cross central London, with mixable selection of the finest valve, ribbon and perspective mics, via world-class Neve pre-amps and Cranesong A/D converters. Each instrument contains essential articulations that best characterise both instrument and player alongside some incredible “artisan” articulations that bring Andy’s flutes to life whilst still obeying the direction of your composition. Andy’s Kit Bag is ingeniously scripted to spring to life straight out of the box. For ease of use, and alongside standard articulation switching, are beautifully designed “performance patches” that respond intelligently to the way you play.
Included in this collection are 5 of his most requested gems from his endless collection of curiosities: Fujara, Ocarina, Chinese Bamboo Flute, the haunting Contrabass Flute and a simply spectacular Shakuhachi.

Andy’s Kit Bag is part of the new “Producer’s Portfolio”. Recorded in a dry environment with a number of different mics, to give a raw set of building blocks to become the DNA of your future compositions. It joins a selection of studio essentials including an amazing selection of exotic percussion by Inder Goldfinger.
Andy’s background of mixed musical experience has led to an incredibly diverse career. Having trained as an orchestral flautist, as principal flute of the National Youth Orchestra in the early 1970s and 3 years at the Royal College of Music, he soon branched out into the London musical scene, from dance band dates (working for Nat Temple, Joe Loss, Eric Delaney & Sidney Lipton among others) to Ballet Rambert, taking in The National Theatre and the formation of the Myhra Saxophone Quartet with John Harle.

He soon found work in the thriving “session” world and was busy depping in the London orchestras and on numerous West End shows. An interest in “ethnic” instruments seemed to fit well alongside work as both an orchestral flautist and a commercial “woodwind doubler”. He has played with an enormous list of renowned international artists, composers, arrangers and producers.

The early 80’s saw the start of his work with the “Michael Nyman Band”, with whom he still tours and records and folk-rock band “The Home Service”. Andy is principal flute of The National Symphony Orchestra, and works with many other chamber groups, including The Ceruti Ensemble , London Saxophonic, Sax Assault and Saxpak.

His West End credits include work in Andrew Lloyd Webber productions, Sunset Boulevard, Whistle Down The Wind, The Beautiful Game, (for which he was named in the Sunday Times review), “Bombay Dreams and “The Woman In White. Other recent shows include “Sinatra At The London Palladium, Wicked, Lord Of The Rings, Oliver and Wizard Of Oz.

Spitfire is a collective of award winning composers and technologists. We don’t just record and build samples we go further than that. We produce with great pride every single note, ushering the best out of the musician and curate each product with a set of articulations, sounds and performances that we know will give you the definitive take of this wonderful anthology. We engage our specialists not only as performers, but as technical advisers to give us a consensus based on experience of what most composers want out of them, what DEFINES the instrument.