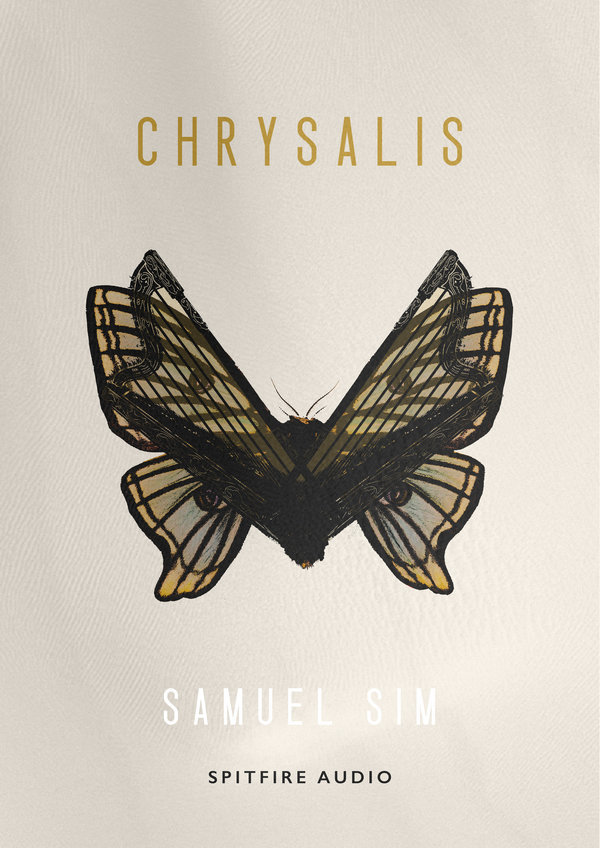 A set of unique and inspirational sounds and tools designed by award-winning film & TV composer Samuel Sim. Centred around his searing talents as a harpist, at the core of this library sits a stunning, deep sampled studio harp. But this is just the beginning. As the name Chrysalis suggests, Samuel and the Spitfire team took extreme steps to bend sound into a collection of unique and fresh tools for your sonic arsenal.

Samuel is one of the busiest composers working in London today. The ferocious pace at which he works exposes the quality and drawbacks of the tools he uses. Chrysalis is a collection of tools and sounds based on Samuel pondering “what if…” and by analysing why he returned to some tools and not others. By grappling with the increasing demands of TV and film execs to reinvent the wheel and create something ‘totally new’ Samuel like many of us struggles with the concept of unfamiliarly familiar.

It is the latter point that crystallised the core concept of the project. To create something that could be used like a piano, but wasn’t a piano; that projected like a harp, but didn’t have the classical baggage; that played like a guitar, but without the folky, geocentric or ethnic connotation.

So at the heart of the library is a beautifully performed and deep sampled harp played by the man himself. Alongside additional techniques are ‘impossible’ techniques. Bending strings beyond comprehension in order to bow adjacent strings as a mere example. Samuel also played some very interesting and modern styles that experience has led him to believe is the way to make a workhorse set of tools.

Samuel also played through an array of awesome FX pedals and processing, delivering a barely recognisable and very edgy set of sounds. Spitfire and Samuel then took all of this rich and raw material and bent it out of comprehensive shape into some of the freshest sounds both Samuel and the Spitfire team has ever heard.

The final piece of the jigsaw was a process of curation to combine sounds into an instantly gratifying set of instruments that only a man of Samuel’s experience would know how to put together! In what Samuel described as “2am instruments” his aim was to create some presets that would allow you, when at your whits end in the early hours of the morning, to write, produce and complete a cue in realtime before you fall into an overworked slumber on the floor of your studio.

176 hand-sculpted sounds, organised into four distinct categories that follow the development of the library from an intimate harp, to a warped organic masterpiece.

‘Initial Pupae’ contains the pure harp sound, deep sampled with 6 different microphone options. It contains the ‘typical’ plucked harp sound normale, as well as a selection of atypical articulations, including all the strings resonating from a cello bow.

‘Nympha Pedals’ is a selection of sounds created by amplifying the live harp through an coterie of pedals and into a Marshall JCM800. Each sound has 4 signals, so you can blend between the pure sound of the harp and the mesmerising soundscapes emanating from the amplifier, with different options for each.

The next stage of Chrysalis ‘Metamorphosis Warps’ is 23 different sounds, each with a single pluck and tremolo option. These each have two signals, combining the harp with an affected other.

‘The Cocoonase’ completes Chrysalis with 100 sounds, again with two signals between the pure and the impure signal. The sounds in here are the softer side to Chrysalis, with luscious pads and ambiences.