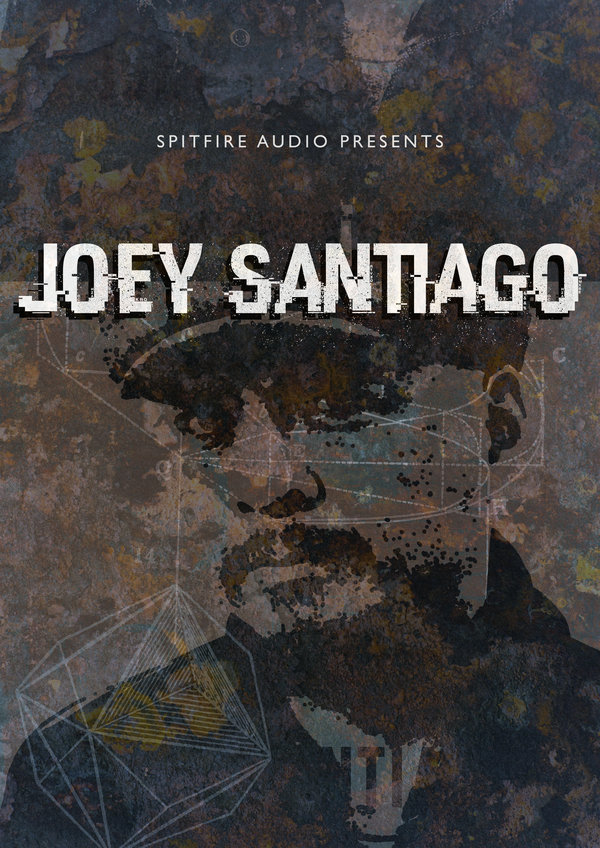 A Monstrous Sonic Plough. In keeping with Spitfire’s Signature range we’re proud to present a true trailblazer, a guitar innovator and prolific composer in his own right. Creating a library of beautifully distorted filth for us all to gorge on. You are not just playing Joey’s guitars and his pedals, via his amps. You are actually playing Joey, playing his guitars and pedals via his amps.

Recorded in LA, re-amped in London and mutated in Edinburgh this library is a well travelled treasure chest of the coolest sounds you’re likely to find in a sample library. Why? Well instead of trying to be cool (an inherently uncool action) why not simply engage the skills of someone who exudes it?

Joey Santiago contains a variety of multi sampled instruments recorded and performed by the man himself through his favoured guitars, his fabled board and his much toured amp rig. We then re-amped the whole thing back in London’s super cool Pool Studios. In addition to the multi sampled virtual instruments we also captured hours of Joey shredding, gating, twisting and distorting into the raw materials for new sonic adventures. Finally, this raw material was taken to Christian Henson’s new ‘warp room’ on the edge of an extinct volcano in Scotland for further sound bending.

Pick the amps you wish to use, and use our popular “Mercury Synth” and eDNA engine to take our work and make it your own. Once done, happily tell people you have Joey Santiago from the Pixies on your track.

We hope this library appeals to a variety of users, rock, pop, EDM-ers, but also TV, Film and Games composers wanting to utilise the “real deal” on their work.

Following on from working with rock god drummers Chad Smith (Red Hot Chili Peppers), Matt Sorum (Guns n Roses) and Roger Taylor (Queen) it was only time to move on to guitars. So it only seemed fitting to go to one of the most inventive and influential guitarists of a generation, and a composer in his own right who knows what goes into creating virtual magic – The Pixies’ Joey Santiago. Santiago has described his guitar technique as “angular and bent”, MTV’s Laurel Bowman commented that Santiago’s “sonic plough was the key element in the Pixies’ monstrous presence”

Spitfire decamped to a vibey little space in East LA, rigged up 6 amps, Joey’s extraordinary pedal board via the finest valve and ribbon mics, into a rare vintage Neve console. The brief was not necessarily define a ‘virtual’ guitar (although there are multi sampled instruments herein), but to create an environment where Joey’s rich arsenal of sounds could flow forth. To follow in the excellent footsteps of Leo Abraham’s Enigma 1 & 2 in making a library that exudes cool, and which takes risks not many other sample libraries would dare to.

6 different signals to choose from; 4 amplified signals including Joey’s own Marshall JCM800, Fender Vibrolux, and a Selmar and 2 different room perspectives.
‘Individual Plucks’ – All sounds played by Joey himself, through a selection of hand picked pedals. 18 different presets that give you they real Santiago guitar sounds.
‘Santiago Sounds’ – 35 different sounds created by the man himself through his vast collection of pedals all in the Mercury engine to add additional FX options.
‘Gigantic Mutations’ – 49 loops crafted from various sections of Joeys playing, housed and warped within Spitfire’s eDNA engine.
‘Radiant Pads’ – 150 sounds curated into 125 different presets, with a metallic edge. All in Spitfire’s eDNA engine.