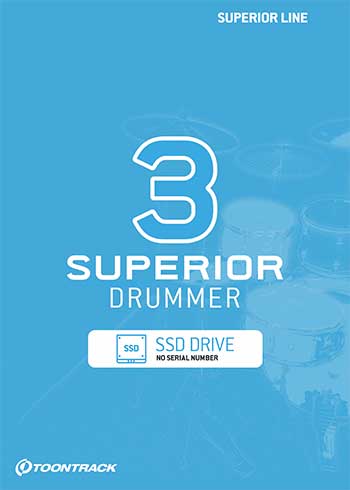 This is the Library update for Toontrack Superior Drummer 3. It is untouched and downloaded straight from Toontrack. Untouched meaning it is not cracked, however it is just a library update so it shouldn’t need to be cracked.

Building on the legacy of its predecessor, Superior Drummer 3 was redesigned from the ground up to introduce a completely new and improved workflow, countless added features and an unequalled amount of raw sound material. With Superior Drummer 3, you are in total control. Welcome to the future of drum production.

E-drum hi-hat performance has been improved by loading Open Tip 1-4 in the default, Clean and George Massenburg presets.
Hi-hat Open 5 is no longer loaded by default which makes the transmuting smoother.
‘Mid Center’ snare articulation is now called ‘Off Center’.
Two new presets, ‘Levee’ and ‘Man of Sand’, featured in Toontrack tutorials are now included.

Some bad samples have been removed.
Cymbal muting is now working in all presets.
Instruments are now correctly routed to the ambience channels in the ‘Big Swish’ preset.
Some descriptions in the instrument database (search results) have been corrected.